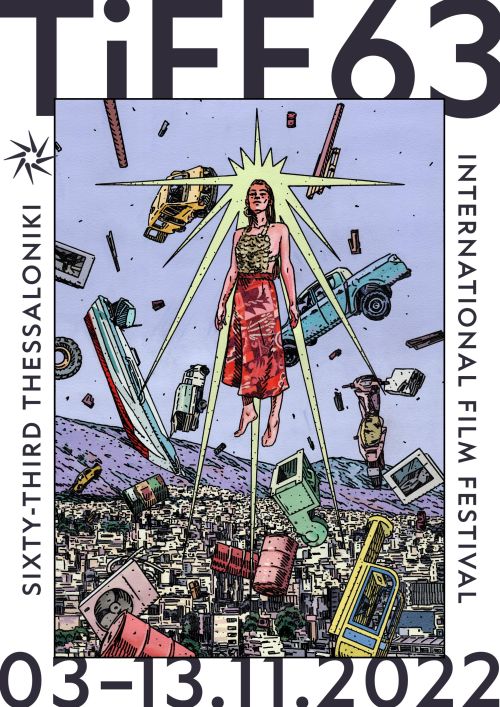 The poster of the 63rd Thessaloniki Film Festival bears the signature of the acclaimed and beloved visual artist Dimitris Trimintzios (Taxis).

The concept behind the 63rd TIFF’s poster:

A female figure is floating above the city. She is the source of life and the core of our world, magnetizing and drawing everything that surrounds and defines us. The 63rd TIFF’s poster is renegotiating the representation of women, raising them to the status they have rightfully earned. As superheroines of the real everyday life that exceed and surmount the innumerable roles they have been assigned and attached to. Time has come for women to demand from each and one and from all of us as a whole to finally look at them through a fresh glance.

The Artist’s Who is Who:

Dimitris Trimintzios (Taxis) was born in Poland in 1983, studied painting at the Athens School of Fine Arts. He took on graffiti from an early age, while since 2005 he has been engaged into street art. In 2002, he stood out at the young talents’ comic contest held by the magazine 9 of the Greek newspaper Eleftherotypia, before starting to publish his own stories in the famous comic magazine Babel. Among others, he has worked as an illustrator for LiFO, CINEMA magazine, Don’t Panic. In addition, he serves as cinematographer at the full-length film A Pink Safety Pin by Nikos Pomonis, which received Special Mention in the Digital Wave section of the 47th Thessaloniki Film Festival, having also worked in the set design of the film Pink by Alexandros Voulgaris. From 2005 to 2009 he took part in the comic festival hosted by Babel, as well as in a series of exhibitions showcased both in Greece and abroad (1st Biennale of Young Artists, 7PLY Project, Remap, etc.). Moreover, he has teamed up with the art group GPO Crew, also delving into the tattoo art alongside the NICO Tattoo Crew.