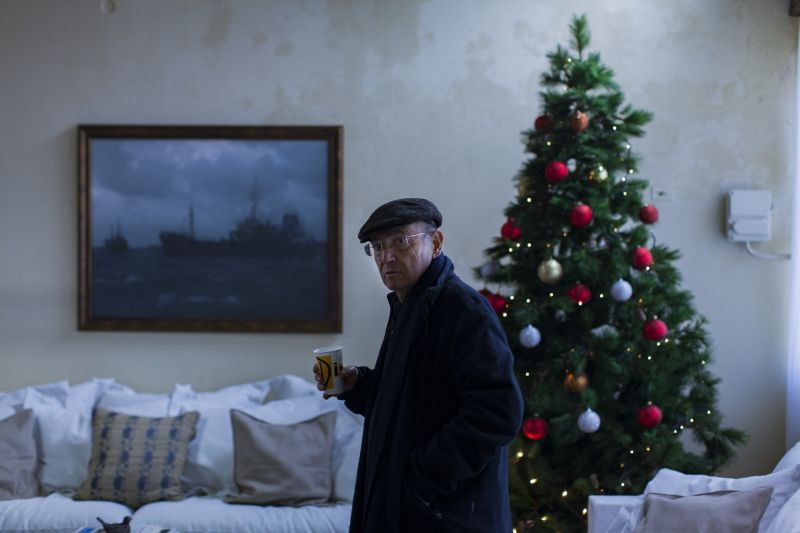 On the occasion of the tenth anniversary since the death of Theodoros Angelopoulos, the Festival hosts an innovative and multifaceted tribute to the prolific filmmaker whose work left an indelible mark on Greek cinema. Two large-scale exhibitions that intertwine the start of his brilliant career and his swan song, the universally accessible screening of his debut film, Reconstruction (1970), a documentary that unveils a fascinating conversation between Theo Angelopoulos and his fellow director Nikos Panayotopoulos, as well as a pioneering two-language edition that delves into the power and mystery of Angelopoulos’ cinematic images, are the main pillars of the tribute.

Reconstruction becomes the heart and soul of this year’s Festival, as a pivotal notion that consolidates and expresses the way we see, grasp and experience the world that surrounds us. In Angelopoulos’ cinema, as well as in art as a whole, the underlying meaning of reconstruction is identified with the human take on reality and life itself.

The Festival’s main exhibition, bearing the title “Anaparastasi: Reconstruction, Reenactment, Reconstitution” explores the different variations and versions of reconstruction. Within the framework of the exhibition, twelve Greek and foreign visual artists draw inspiration from Angelopoulos’ directorial debut and contemplate on the form, the content and the boundaries attached to the process of reconstruction. The artists taking part in the exhibition are Larry Amponsah, Dimitris Anastasiou, Antonis Donef, Eirene Efstathiou, Andrew Pierre Hart, the artistic duo Hippolyte Hentgen (Lina Hentgen και Gaëlle Hippolyte), Magdalena Karpinska, Natalia Manta, Asako Masunouchi, Vivi Papadimitriou and Antonis Theodoridis. The exhibition will be hosted in Momus-Experimental Center for the Arts (Port of Thessaloniki) and will last up until November 27th. Shortly after its completion in Thessaloniki, the exhibition will move to Athens, hosted at The Project Gallery (3, Normanou str.), from December 20th to January 28th.

In addition, the 63rd TIFF will showcase an exhibition featuring the photos taken by Nikos Nikolopoulos, who worked as an on-set photographer in the film The Other Sea, during the shooting of which Theo Angelopoulos passed away ten years ago. Nikolopoulos’ photos take us to the core of the artistic act and of Angelopoulos’ vision, shedding light on the unseen aspects and moments of an iconic filmmaker. Moreover, the exhibition stirs even further everyone’s imagination with regard to an unknown and half-completed movie that will remain forever linked to the unforeseen and shocking death of a unique director. The exhibition, titled “The ‘Sea’ in the Port” will be showcased at the former nursery station at the Port of Thessaloniki, an iconic landscape featuring in many of Angelopoulos’ films from Voyage to Cythera and Landscape in the Mist all the way to Ulysses’ Gaze, Eternity and a Day and the The Weeping Meadow. By placing these photos, from the Other Sea to the heart of Thessaloniki port, we attempted a form of return, the completion of the homecoming, the reconstruction of a locus that was left half-complete, the repatriation of the gaze. The photos were initially presented at the Melina Cultural Center of the Municipality of Athens in January and February 2022, in an impressive exhibition titled Bridge-Builder. The exhibition was curated by Christoforos Marinos and Vangelis Ioakimidis.

The Festival’s artistic director, Orestis Andreadakis, is the curator of the exhibitions, while both of them will celebrate their opening on Saturday November 5th, at 7pm. The architectural designing of the exhibition “The ‘Sea’ in the Port” is carried out by Maria Maneta.

Reconstruction takes place in the village of Tymphaea, in Epirus. An immigrant, working in Germany, is returning home after a long time and ends up killed by his wife and her lover. This story unfolds through a series of different research investigations - reconstructions of the crime: the bureaucratic aspect of the interrogation, which seeks to find a guilty scapegoat to wrap up the case, as well as the journalistic side that records the residents’ testimonies, brings forth the sociological framework in the core of the story, but also the dramatic social reality of the village that remains an open wound.

The movie To Each Their Voice; Theo Angelopoulos & Nikos Panayotopoulos, directed by Antonis Kokkinos and Yannis Soldatos, which will be screened at the 63rd TIFF, brings to light an unknown and fascinating conversation. In the mid80s, Aegokeros editions intended to publish a magazine oriented on cinema and theater. Theo Angelopoulos and Nikos Panayotopoulos, lifelong friends, pillars and pioneers of the New Greek Cinema were selected as the main topic for the first issue of the magazine. One summer evening, Antonis Kokkinos and Yannis Soldatos joined the two directors in Angelopoulos’ house, in Mati, and recorded a three-hour discussion between the two filmmakers. In the course of the talk, their common starting point and afterwards separate courses were laid down. Unfortunately, the interview was never published. Long forgotten for more than 35 years, the cassettes and the transcript are now coming to light. A rare and precious document on the work of two prolific filmmakers, Greek cinema and the 7th art as a whole.

The special two-language edition of the Festival dedicated to Theo Angelopoulos dares to innovate and experiment both in terms of structure and content, placing emphasis on the sheer value of his imagery, which gives birth to archetypes and symbols that reflect Greek history, the fate of mankind and the passage of time. The edition includes the eleven works showcased in the main exhibition, while giving the floor to three distinguished Greek photographers, Nikolas Ventourakis, Alexandra Masmanidi and Ilias Sipsas, who approach Reconstruction through a photo mosaic that gives prominence to the visual and aesthetic grandeur in Angelopoulos’ work.

As for the edition’s texts, the Festival placed emphasis on the poetic hue of Angelopoulos’ work.  Poet and translator Yannis Antiochou, poet and animator Pavlina Marvin, writer and photographer Christos Chryssopoulos, poet and architect Phoebe Giannisi, share the impact and the influence of Angelopoulos’ work on them. Last but not least, the edition will be honored by the presence of film critic, film director and writer Nicos Ligouris, the first ever Greek critic who dwelled on Reconstruction as a columnist in the legendary Contemporary Cinema magazine. Fifty years later, Ligouris revisits this unforgettable film with a fresh pair of eyes.