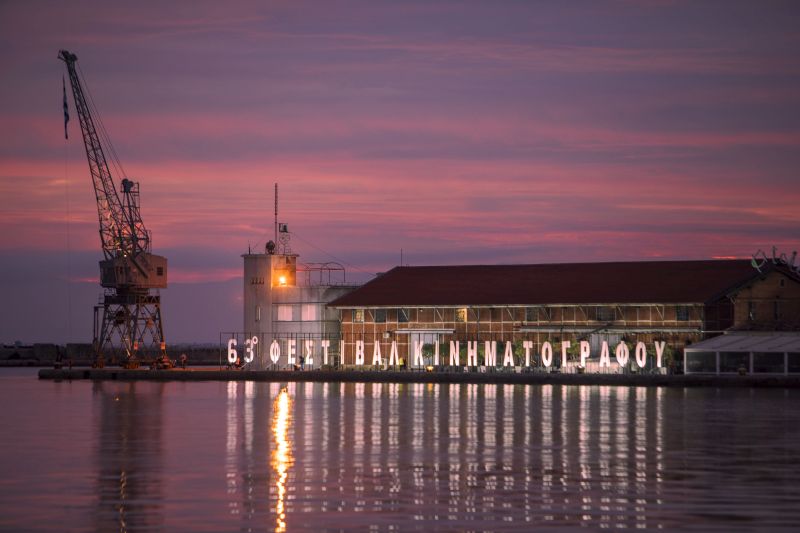 The Festival in a nutshell

The 63rd Thessaloniki International Film Festival will be held from Thursday 3 to Sunday 13 November 2022, both in physical spaces and online. Within the framework of the 63rd TIFF, 199 full-length and 68 short films will be screened in the time-honoured home ground of the Festival, theatres Olympion, Pavlos Zannas, the theatres situated in the Port of Thessaloniki, Frida Liappa, Tonia Marketaki, John Cassavetes, Stavros Tornes, as well in the movie theatre Makedonikon. In addition, the audience will have the chance to watch 93 films online, through the digital platform of the Festival, online.filmfestival.gr.

The 63rd TIFF’s poster bears the signature of the visual artist Dimitris Trimintzios, whereas the Festival’s spot was directed by the multi-awarded director Evi Kalogiropoulou.

Multifaceted and stunning Charlotte Gainsbourg will attend the Festival, on the occasion of the screening of her film, Passengers of the Night by Mikhaël Hers, within the framework of the Open Horizons section of the 63rd TIFF. Moreover, lifelong friend of both the Festival and the city of Thessaloniki, Fatih Akin, will land in Thessaloniki to greet the audience in the screening of his latest film, Rhinegold.

“RECONSTRUCTION” IS THE FESTIVAL’S MAIN THEME

On the occasion of the tenth anniversary since the death of Theo Angelopoulos, the Festival is hosting a pioneering and innovative tribute to the auteur who changed the landscape of Greek cinema. The 63rd TIFF renders homage to Angelopoulos’ debut film, placing the idea of “Reconstruction” at the very core of this year’s edition, as a notion that reflects not only the magic of cinema, but also the way we interpret and grasp life and the world that surrounds us. In particular, the Festival’s grand tribute includes:

⇨ The photo exhibition titled “The ‘Sea’ at the Port”, featuring the work of Nikos Nikolopoulos, who worked as on-set photographer in the film The Other Sea, the unfinished swan song of Theo Angelopoulos.

⇨ The special two-language edition of the Festival, Angelopoulos forever, focused on the mystical power of Angelopoulos’ cinematic imagery.

⇨ The special screening of the documentary To Each Their Voice: Theo Angelopoulos & Nikos Panayotopoulos by Antonis Kokkinos and Yannis Soldatos, which brings forth a never-seen-or-heard-before discussion between two iconic figures of Greek cinema.

A LARGE-SCALE TRIBUTE TO ACTING

The 63rd TIFF hosts a grand tribute to the art and the profession of acting, under the title “Time to Act”, featuring a series of fascinating masterclasses delivered by distinguished guests from Greece and abroad:

In addition, the awarded films of the recent 45th Drama International Short Film Festival will also be screened at the 63rd TIFF.

The Festival offers a full-scale and wholehearted support to Greek cinema through the action Meet the Future, showcasing seven up-and-coming actors from Greece, the Agora Short Film Lab initiative, hosted in collaboration with the Clermont-Ferrand and Drama festivals, as well as though the Thessaloniki Locarno Industry Academy action. Moreover, for the third consecutive year the Festival offers a screening fee to all Greek films taking part in its official selection. Last but not least, the Festival will provide a boost of 3,000 euros per film to all filmmakers who take part in the most prestigious international film festivals with their debut or sophomore film.

*A total of 11 films are taking part in the International Competition section of the 63rd TIFF, among which we encounter two Greek films. The 11 IC films are competing, among others, for the Best Full-Length Award “Theo Angelopoulos” (Golden Alexander, accompanied by a 10,000 euros cash prize), the Special Jury Award (Silver Alexander, accompanied by a cash prize of 5,000 euros), the Special Jury Award for Best Director (Bronze Alexander), which is backed by COSMOTE TV, the Festival’s Grand Sponsor, with a cash prize of 3,000 euros.

* A total of 10 films are lining up in the Meet the Neighbours competition section, among which we encounter two Greek films. The 10 MtN films are competing for the Golden Alexander (cash prize of 8,000 euros) and the Silver Alexander - Special Jury Award (cash prize of 4,000 euros).

* The >>Film Forward competition includes a total of 11 films, among which we encounter two Greek films, competing for the Golden Alexander (cash prize of 8,000 euros) and the Silver Alexander – Special Jury Award (cash prize of 4,000 euros).

* Marking a first, Mastercard is backing this year’s Mermaid Award with a 3,000-euro cash-prize.

* The Immersive/VR Competition makes a dynamic comeback, hosting 8 films screened at the Glass House (first floor of the former nursery station, in the Port of Thessaloniki), which compete for the 2,000-euro award. In addition, the immersive installation White Dwarf, created by Yolanda Markopoulou, will be showcased out of competition, at the East Entrance Guardhouse, at Pier A (Port of Thessaloniki).

* We discover the most dynamic and innovative cinema trends in the Open Horizons section, as well as in its sub-section Open Horizons - Another Take.

* We present the best Balkan movies in the Balkan Survey section.

* We catch up with our favourite directors in the Special Screenings section.

* We meet up in the late hours zone of ’Round Midnight.

* The 63rd TIFF gives prominence to the young generation voices through the NextGen section.

Featuring beloved actor and scriptwriter Yorgos Kapoutzidis as ambassador and unveiling the newly established section of Agora Series, which tunes in with the spirit of our times, the 63rd TIFF’s Agora will serve as a liaison between the professionals of the international movie industry and the Greek film community. This year’s Agora will dedicate a full day, Thursday November 10, to its new section, hosting a series of masterclasses and discussions that will highlight the affinities between TV production and the movie industry, giving the floor to representatives from major Greek and international networks, as well as to producers and directors of series for TV networks and platforms. TIFF’s Agora (4-12 November, 2022) is supported by Creative Europe MEDIA programme and bestows awards in services and cash prizes that amount up to 200,000 euros.

Ten Greek-speaking and English-speaking podcasts are contenders of the grand award of 2,000 euros, in the Podcast competition section of the Festival, while another ten podcasts take part in the Festival, included in the out of competition section. The audience will have the chance to listen live to all competition section podcasts in the specially configured venue of the Podcast Room, in the Port of Thessaloniki, with free admission for the public. In addition, the 63rd TIFF’s and the 25th TDF’s podcasts are competing for the ENS Louis Lumière - French Institute of Greece Award for Young Audio Documentary Creator. Moreover, the new Podcast Development Award, granted by iMEDd, in collaboration with TIFF, will be announced in the Festival’s closing ceremony. All podcasts will be available through the Festival’s website, www.filmfestival.gr.

This year marks a first for the Accessibility Award granted by Alpha Bank. The award, accompanied by a 3,000-euro cash prize is bestowed either to a film or a personality that brings forth issues that revolve around the unhindered access to arts. As every year, within the framework of the 63rd Festival, two universally accessible screenings will be held featuring two legendary Greek films

TOWARDS A MORE SUSTAINABLE FESTIVAL

The 63rd Thessaloniki International Film Festival, capitalising on the experience and the gains of Evia Film Project, launches a series of actions and initiatives aiming to reduce its environmental footprint and raise awareness on the goal of sustainability.

Moreover, the Festival, honoring the memory of Alkis Kampanos, who was murdered in Thessaloniki, in February 2022, invited young people aged 18-30 to create 1-minute films on the issue of hooliganism-related violence. Five of the films submitted will be awarded within the framework of the 63rd TIFF.

The Festival presents its two special editions, in collaboration with Nefeli publishing house:

- The beloved and – as always – innovative A-Catalogue that beats to the drum of the    63rd Festival.

The Festival’s program, as well as more information on the films, are available on www.filmfestival.gr. Presale season opens on Tuesday, November 1st.