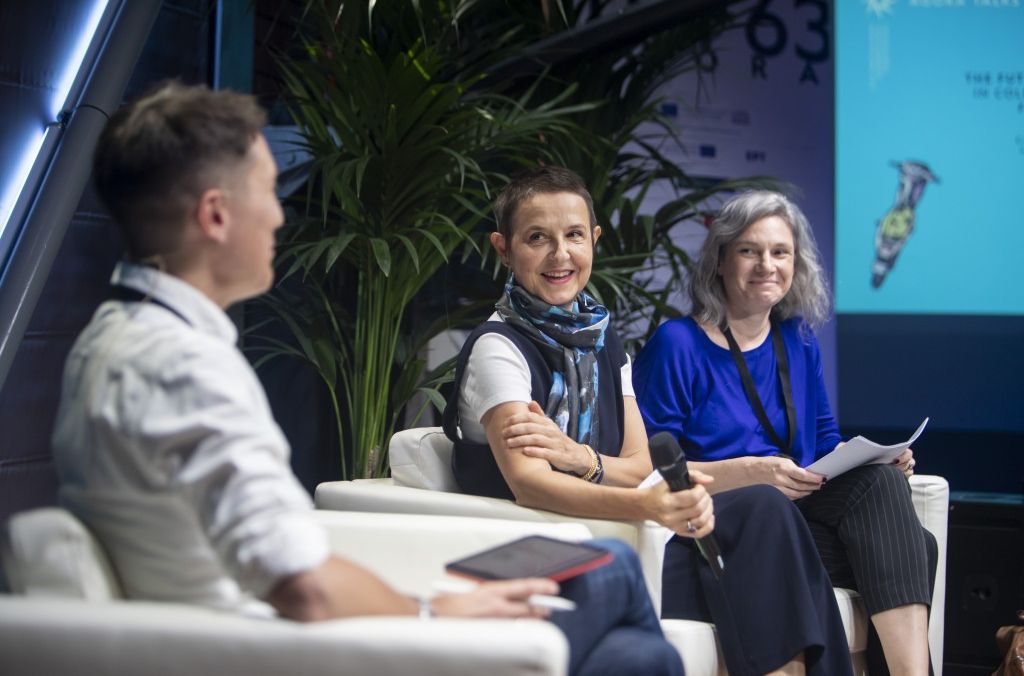 The Thessaloniki International Film Festival launched a series of Think Tanks on the future of film markets, calling on European markets to discuss and seek solutions, proposals and changes to support the film community. The event took place at the MOMus-Thessaloniki Museum of Photography, while the results will be announced by TIFF, in a special event at the upcoming Cannes Film Festival, in May 2023.

The online guests were Pascal Diot (Venice Film Bridge), Martina Bleis (Berlinale Co-Production Market), Hugo Rosak (Karlovy Vary Eastern Promises), Marcello Paolillo (Locarno Pro), Saoia Riba (San Sebastián Industry) and Inke Van Loocke (IFFR Pro). The Agora event aimed to stimulate active participation in the wider debate, to trigger similar topics, to exchange views on the upcoming challenges, but also offers useful support to the other European film markets, regardless of their size or scope, that are willing to ask the question and seek answers: Should film markets continue to operate the same way? What actions should be taken to pave the way for important changes?

Initially, AC Coppens, the discussion moderator, welcomed the guests – both those present and those attending online – as well as the audience, by stating that the future of the film markets is a fervent question that has been raising concern in recent years, especially after the pandemic. They then gave the floor to Elise Jalladeau, the General Director of the Festival, who spoke about the challenges in the field of film markets in the post-covid era.

“We are all professionals in the film industry. We know the industry and its history, but also the occasional ‘revolutions’. We tried to implement new activities and become more sustainable. We know where we come from and what we are supposed to do. Due to the pandemic, we looked for new ways to adapt, we communicated with partners online. Changes speed up the process and the industry changes fast. We want to take a step back and think about our next actions, to become more systematic in the way we approach any problems. We also want to work as a team: we all belong to the same 'ecosystem' and if we work together, we will be able to define the new identity of the film markets”.

Then, Angeliki Vergou, head of the Agora, took the floor and spoke about the hybrid format of festivals: Many Agora and other film markets participants wonder if it is worth spending time visiting the events of the film markets. They become selective about where to go and which markets to visit. The hybrid format is very helpful in this direction, because one can watch and participate online. It helps markets like ours, or even smaller ones, to be able to offer to people something that is worth their time and attention”.

Afterwards, AC Coppens, the coordinator, commented that we have recently returned to physical presence at festivals, resulting in an intense mobility. Commenting on the problems faced by distributors, Elise Jalladeau said: “The audience is targeted in a few specific films. As a film market, we are unable to solve all the industry problems. The question is how we would still come up with tools for European films to prosper. It's all about cinematic diversity: how we're going to continue to be useful to distributors, producers and other professionals in the film industry”.

At this point, Angeliki Vergou took the floor and pointed out the importance of the local character of each film market, underlining that all film markets located in areas with low audio-visual production potential, should support local projects. Ms. Jalladeau then spoke about the rise of streaming on a worldwide scale. “All Markets put on the same question: is there a thirst for new content? Film production companies seem to deal with the production of television content as well as with the production of film content. The question is how far we can go without altering our core dynamics, which is cinema”.

AC Coppens then moved on to the topic of sustainability: “Sustainability, not only ecological but also social, is an important and crucial issue. We are talking about business and money of course; we are also talking about financial sustainability”. How important is this issue for a film market? “All film markets that managed to cope with the changing conditions of our times, have embraced ecological sustainability”, Ms. Vergou replied. “This sustainability in turn leads to social sustainability and diversity. If you have a pluralistic film market that promotes new talents, you manage to stay tuned to an ever-changing landscape." On the occasion of the above mentioned, the moderator of the discussion said that there is a relevant survey that industry professionals can fill in. Professionals can discuss in detail about the changes they would wish to see implemented, but also the issues that they would like to discuss in upcoming Think Tanks and see their results and solutions at the Cannes Film Festival, May 2023.

Then, the online guests posted about the upcoming Think Tanks and the problems they would be solved. Pascal Diot (Venice Film Bridge) spoke about the need for public funding of film markets. Saoia Riba (San Sebastián Industry) cited the difficulty of tracking hybrid event viewing. Marcello Paolillo (Locarno Pro) referred to two kinds of film markets, those aimed at industry and the commercial part and those oriented towards networking and long-term relationships, agreeing that funding is a matter of high importance. Hugo Rosak (Karlovy Vary Eastern Promises) underlined the need to understand the different sizes of each film market, a statement Ms. Jalladeau agreed with, commenting that “we must know who we are and each film market should operate according to its size”. Finally, Martina Bleis (Berlinale Co-Production Market) underlined the need to set a final goal for the Cannes Film Festival, May 2023.

Finally, Ms. Vergou commented on the role of the pandemic in changing the landscape of film markets: “Due to the pandemic, people gathered from different film markets discussed hybrid formats, financing and other issues. Everything happens so fast and everything is so uncertain. The real reason we are organising this Think Tank is that we want to force ourselves to contemplate”. The coordinator, AC Coppens, concluded: “The first step has been taken and the final result will be presented in Cannes next spring”.