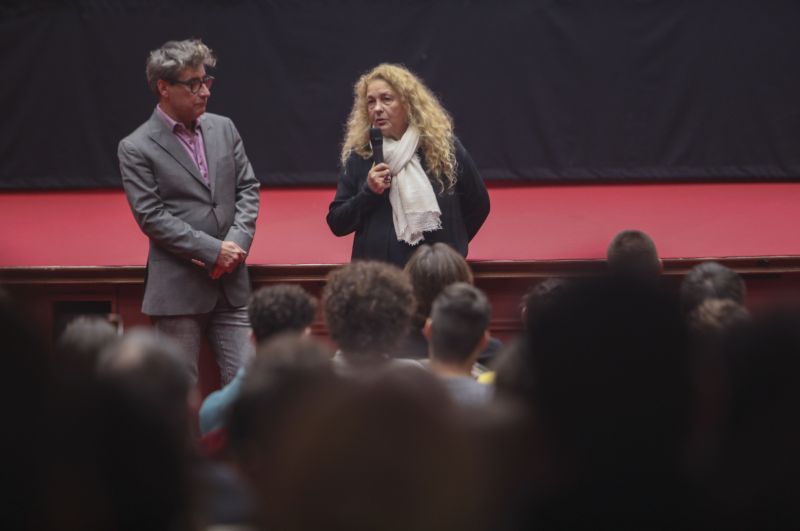 The universally accessible screening of the film Reconstruction (1970) by Theo Angelopoulos, took place on Sunday November 6th, at the packed Olympion theater, as part of the grand tribute dedicated to the unforgettable Greek filmmaker, organized by the Festival. In this way, Thessaloniki’s audience will have the rare chance, with no exceptions or limitations, to enjoy one the most acclaimed moments in Greek cinema’s history on the big screen. The screening was accompanied by Audio Description for the blind and the visually impaired and Subtitles for the Deaf or Hard of Hearing. As every year, the Festival’s universally accessible screenings are held in collaboration with Alpha Bank, the Festival’s Accessibility Sponsor.

The event was prefaced by Orestis Andreadakis, the Festival’s artistic director, who introduced and described himself in terms of accessibility, before welcoming the audience and the guests. “I am approximately 1.80 high, I am wearing a grey blazer and jeans, my hair is a bit messy and I have round glasses on. The film we are about to watch and hear today is the debut film by the great director of Greek cinema, Theo Angelopoulos. Reconstruction sets the tone of this year’s whole festival and sets off a series of other events:  two exhibitions, one documentary screening and a two-language edition. The film was made in 1970 and was screened here, at the Festival, snatching five awards. In parallel, a whole new wave of Greek cinema was initiated, marking also the starting point of Theo Angelopoulos’ great course. I am thrilled that we have with us here tonight my friend, Dionisis Samiotis, the son of the legendary producer of the film, Giorgos Samiotis. I am also thrilled that the two sons of the protagonist Giannis Totsikas, Apostolis and Thanassis, are also here. I would however like more than anything, to thank the family of Theo Angelopoulos. His daughters, Anna, Katerina and Eleni, and of course his beloved partner, and also producer of many of his films, Phoebe Economopoulos-Angelopoulos”.

At this point, Mr. Andreadakis handed the floor to Mrs. Economopoulos-Angelopoulos, after describing her external appearance in detail for the visually impaired audience. “Mrs. Angelopoulou is wearing a black outfit, a white scarf and has really beautiful puffy blond hair”. Then, Mrs. Economopoulos-Angelopoulos stated the following: “I am extremely happy that this film is screening at the Festival. I am not sure if you know this, but at that time – maybe also today, but much more then – films were almost literally handmade, while the production was a real production. Samiotis was an electrician of Greek cinema (his son is now a producer) and managed to give everything to this five-member crew, with minimum compensation, in order for this film to be completed in five weeks. This film is a depiction of the era, refers to the lack of job opportunities in Greece and to immigration – a phenomenon that continues to this day, but not with the same features. The initial trigger for the film was a news story on the paper, about a woman who killed her husband at a village in Epirus, buried him in the garden and planted onions at the top. Theo had a unique sense of humor, even if no one talks humorously about death, but this case had something oddly interesting, it was exactly what prompted the making of this film and the beginning of an international career, a journey around the world of entertainment. I am very proud that you will be able to watch the film on the big screen and I warmly thank the Festival. I hope you enjoy it”.

Reconstruction takes place in the village of Tymphaea, in Epirus. An immigrant, working in Germany, is returning home after a long time and ends up killed by his wife and her lover. This story unfolds through a series of different research investigations - reconstructions of the crime: the bureaucratic aspect of the interrogation, which seeks to find a guilty scapegoat to wrap up the case, as well as the journalistic side that records the residents’ testimonies, brings forth the sociological framework in the core of the story, but also the dramatic social reality of the village that remains an open wound.