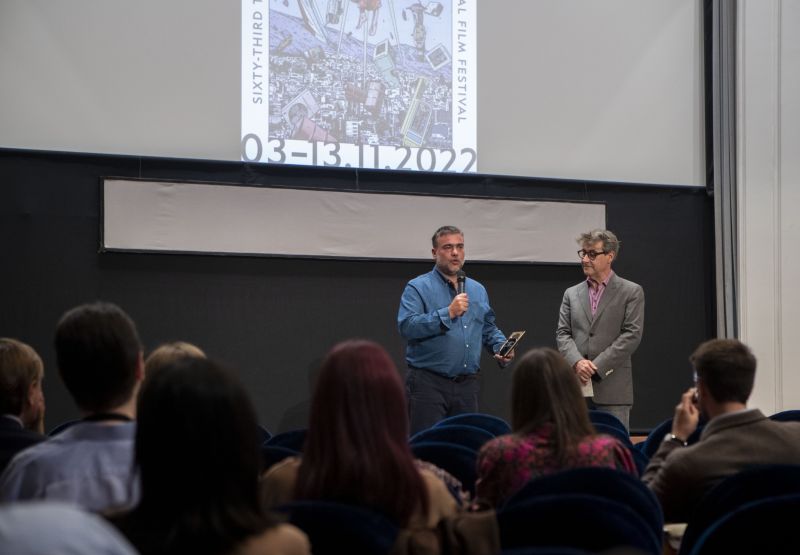 In a special event held on Sunday, November 6th, at the Pavlos Zannas, Thessaloniki International Film Festival awarded production company Finos Film, with an honorary Golden Alexander for its valuable contribution to Greek cinema. Orestis Andreadakis, the Festival's Artistic Director introduced the award ceremony: “Thessaloniki International Film Festival decided to honour this year Finos Film, the most historic film production company in the entire course of Greek cinema. It has been 80 years since its foundation and I am here with Iason Triantafyllidis, a man who has studied thoroughly the history of Greek cinema and has prepared a special edition that will be shared with the today's screening audience”.

Mr. Triantafyllidis then took the floor, stating the following: “The first film of Finos Film was The Voice of the Heart, screened in 1943. Three years earlier, in 1940, The Parting Song was the first talking film to be shot in Greece, a film created by Finos with his own machines and equipment. Finos Film, and especially Finos himself, is in many ways a unique case in world cinema, as he was the financier, producer and overall creator of his films. Ultimately, he gave shape to Greek cinema, endowing it with a voice and an image, elevating it to the status of a commercial and important product. He visited great festivals like Cannes, he reached the Oscar, made cinemascope cinema with stereo sound. His films, purely commercial achievements, endure, entertain and are still adored. Many congratulations to Orestis Andreadakis who awards Finos Film and Finos – they are one and the same – with this Golden Alexander because Thessaloniki International Film Festival also owes him a lot. Finos was always present at the Festival, from the first day of the event, in 1960, until October 1976, three months before his death”.

Then, Stathis Kamvasinos, communication manager of the company, who received the honorary Golden Alexander for the contribution of Finos Film to Greek cinema, took the floor. “Speaking on behalf of the entire team of Finos Film, I would like to thank the Festival for this honorary award. I would like to emphasize, however, that this award belongs to the founder of the company – as Iason said, these two were identical – Filopimenas Finos. He was a creator and a fighter who, almost 80 years ago, in January 1943, presented to the Greek public a perfectly crafted Greek production, the film The Voice of the Heart, at Rex cinema, on Panepistimiou Street, in Athens. The film had an enormous success. In the years of Occupation, people wanted to express their unbridled joy, so they poured out into the streets and marched to Omonia Square. They actually wanted to thank this creator. As if they were telling him "keep on doing what you are doing" and Finos, feeling his efforts were praised and appreciated, set out for the mission he was assigned to accomplish. He had a brilliant career under his belt, with an international cultural impact for Greece. I believe that, eighty years later, the descendants of those who had had watched the film at the time are touched when seeing legendary motto: Finos Film presents... A motto that not only conveys the quality of the film, but also of all the artists and contributors who stood by it, and he in turn made them famous, encouraged them, inspired them. And they all passed into immortality. I sometimes believe that this motto is enough and no-one cares what film will be screened next. It's the entertainment certification and guarantee mark of what will follow next”.

As part of the event, the beloved Greek comedy My Friend, Lefterakis, of 1963, directed by Alekos Sakellarios, was screened, starring Maro Kontou, Dinos Iliopoulos, Kostas Voutsas, Giorgos Konstantinou, Kaiti Panou and Christos Tsaganeas. A special edition was also distributed to the audience, edited by Iason Triantafyllidis.