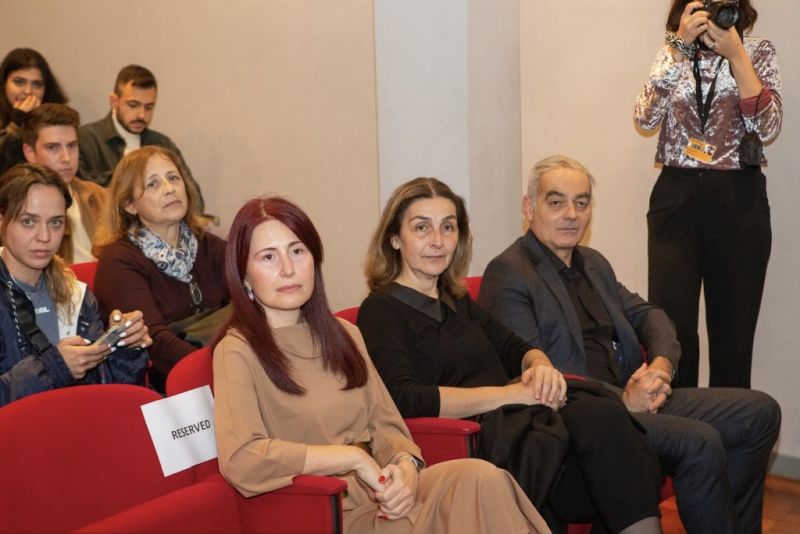 On the occasion of the murder of Alkis Kampanos, Thessaloniki International Film Festival announced a call for competition for the production of one-minute films by young people aged 18-30, receiving more than 70 entries. Thirteen films, selected by the jury were screened and five of them were awarded in a special event held on Sunday, November 6th, with the presence of the murdered Alkis Kampanos’ parents, Aris Kampanos and Melina Kampanou, at the Takis Kanellopoulos Hall (Thessaloniki Film Museum). At the same event, the five-minute film Soccer as an excuse for violence by Michael Dukakis was screened. This film conveys the personal testimony of the actor and screenwriter from the hooligan attack on the “Texnis Theater” in February 2011.

Orestis Andreadakis, the Artistic Director of the Thessaloniki International Film Festival, introduced the event: “We decided to carry out this action a few months ago, on the occasion of the tragic murder of Alkis. I am very moved that Alkis Kampanos' parents are here. This motivated a large section of young people to talk about important issues. We support the Structure In the Name of Alkis and we thank the children that participated in these 71 beautiful films. Today, we will be watching the thirteen films that have been shortlisted and we will award five of them.”

Following the screening of the films, Mr. Andreadakis gave the floor to Eleftheria Thanouli, President of the Board of Directors of the Festival and Professor at the Aristotle University of Thessaloniki Film Department, who in turn, welcomed the audience by saying: “No film can be cut off from society and from the conditions that created it. The same should apply to the institutions. Among the various missions of the Film Festival is to be alert and in contact with society, to dare, to raise awareness and to mobilize for such important issues. Tragic events, such as the Alkis Kampanos murder, shock our conscience; turn our gaze to the most uncomfortable and unpleasant aspects of society, calling on us to take action. The Festival decided, therefore, to take action in the best way: through the cinema itself. We felt that there would be nothing more appropriate than to give the floor and the opportunity to young people to talk about the issue of hooliganism-related violence, but also to pay tribute to the memory of Alkis, through the images and sounds. And what we saw today was really amazing,” she said, "I hope you have the same feelings with me. The response of the people was really very moving, as more than 70 films were submitted. We assigned them to three people who know and love cinema. The jury is here with us and will talk to you about the selection of films. Finally, I would like to say that we feel much honored to have Alkis’ parents here today with us. Thank you very much for finding the courage to come and support this effort. The dignity and courage of these people in the face of the tragic loss of their son not only inspires us, not only moves us, but above all, it shows us the way we should act, whether as parents, teachers or ordinary citizens. We should do everything we can to defuse this anger in society. I think this anger was also the theme that stood out especially in all the films. This is the only way we can continue to coexist as humans in a society and, in my opinion, this is the most important issue at stake”, Mrs. Thanouli concluded.

The jury, consisting of Dimitris Gotsis, director, Giannis Sakaridis, the Artistic Director of the Drama International Short Film Festival and Elsa Poimenidou, journalist, selected 13 films, while the five films that stood out to the jury were awarded, also receiving cash prize of 1,000 euros. Prior to the award ceremony, Mr. Sakaridis read the reasoning for the awarding of the five films: “The huge response of young people to this initiative can only bring us joy and hope. Through the 71 one-minute films we realized the need of young people to return to romance. This need was the starting point for the jury’s reasoning. We searched for the five films, which, regardless of technical means, managed in just 60 seconds to tell stories, without prejudice or stereotypes, with integrity. We would like to thank the Festival for the trust and the 71 film makers who reminded us of the joy and love of the game”.

The five films awarded are:

The Festival thanks the Structure of February 1, 2022 - In the Name of Alkis for its support. The Structure honours Alkis’ memory, supports the victims of hooliganism-related violence and fights for the change of sports fan culture.