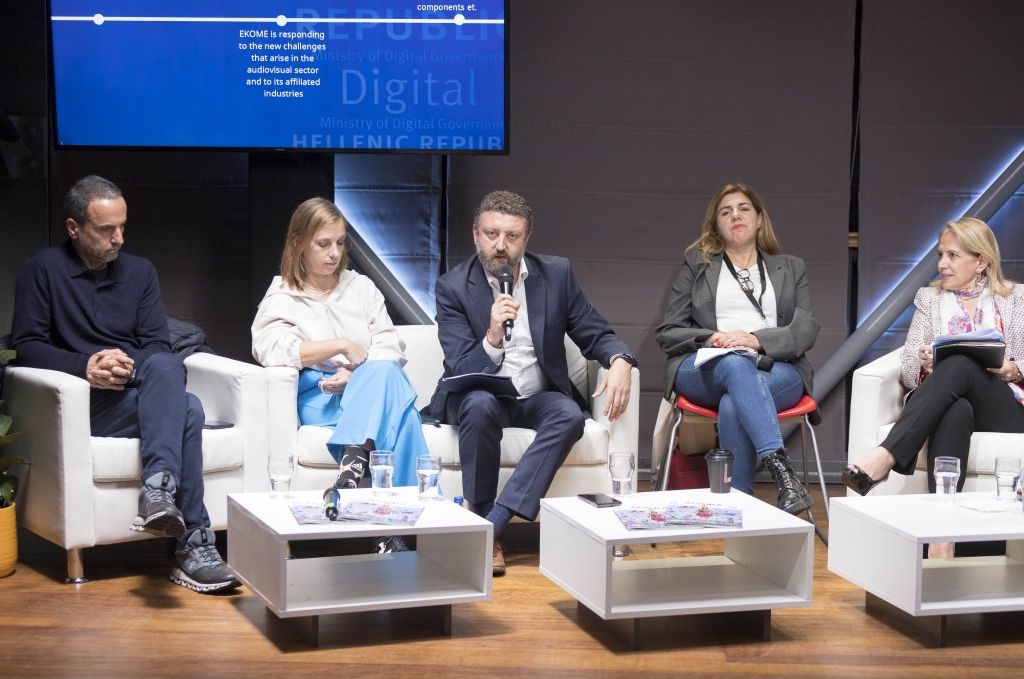 Within the context of the 63rd TIFF’s Agora Talks, a discussion on “The Changing Landscape of Greek Film and TV Financing: Developments, Opportunities and Challenges. What Experience Has Taught Us, and Where We Go Next,” took place on Sunday November 6th, at MOMus-Thessaloniki Museum of Photography, hosted by the Audiovisual Producers’ of Greece (SAPOE). The topic was no other than the constantly expanding field of the financing of Greek producers, along with the legal opportunities presented, as well as the prospects for development in the future. The speakers in the panel were: Fenia Kosovitsa, Vice President of SAPOE and Producer at Blonde, Maria Drandaki, member of the Board of Directors of SAPOE and Producer at Homemade Films, Kostas Kefalas, Producer at Faliro House Productions, and Simos Manganis, Producer at Green Olive Films. The coordinator was the Producer Amanda Livanou (Neda Films), Treasurer of SAPOE, and guests Leonidas Christopoulos, Secretary General of the Ministry of Digital Governance, and Athina Chatzipetrou, CEO of the Hellenic Development Bank.

Ms. Livanou prefaced the event by stating that the creation of a film, apart from an artistic project, is also a financial endeavour. After introducing the speakers, she gave the floor to Mr. Christopoulos, who in turn thanked for the invitation and summarised the creation (2017) and amendment (2018) of the cash rebate by adding that: “We want the cash rebate scheme to continue and that is why we have succeeded in extracting another 200 millions, mainly from European funds, already having secured the 75 millions of the national budget. At the same time, we will continue to contemplate on simplifying the regulatory framework, for there will always be a need for update”. Before giving the floor to Ms Chatzipetrou, he mentioned: “One of the main problems, as the industry grows in Greece, is that we need to train the people who work in it, so as to support new ideas and proposals from professionals, in order to make the best use of the available funds”.

Ms. Chatzipetrou started her presentation by saying: “I wish to intrigue you, the same way that you intrigue me, my emotions and my enthusiasm”. She then referred to the €62.5 million Audiovisual Productions Portfolio Guarantee Fund: “It is the tool that finances your company, your company's investment, based on a business plan, evaluated by the Investment Committee. You own a company, you are creative, you have your products, but you are also an entrepreneur, so you need to bear in mind that you need to check the “basket” of financial tools you can use. You have the cash rebate for the product; you can have this product for the investments, which goes directly to your business. Υou also have other options too, such as being included in the so-called horizontal products. For example, the HDB will be launching in a few months an 800 million programme, called Growth, aimed at merging companies. The “basket” of financial tools is never empty. I also want to ask you to join the HDB platform, Inno Agora, created jointly with the French Development Bank where you will find many other people like you, start-ups, r&d, growth, investors. It is like Facebook for companies and because it is not only addressed to Greece, but to a wider European range, it becomes even more interesting”. Finally, Ms. Drandaki urged her to speak about the new plan of the framework expansion for small and medium-sized enterprises, set off in January.

Mr. Christopoulos then referred to the three main financial tools for audiovisual producers: “Number one is the cash rebate, it has to do with the projects’ financing. Then, there is this financial tool that supports either your business or the ecosystem of businesses related to yours. Businesses that have to do with equipment, for example, that they want either to start or finance their investments in terms of infrastructure, marketing, etc. Mr. Manganis took the baton, indicating that film productions originating from other countries are in need of a cash-flow certificate, due to the cash rebate, as the lack of it poses a problem in how fast and productive our country can be. “We're creating an ecosystem, we have got the policy, the tools, the film producers, we are just missing that part of the creation chain, of this simple, sustainable dynamic”. Mr. Christopoulos agreed with Mr. Manganis, adding that there will be discussions on the filling of this gap in terms of sustainability.

On the occasion of a question posed by Ms. Drandaki on how companies will have access to present and future financial tools, Ms. Chatzipetrou pointed out that in addition to creative businesses, production companies are also financial ones in terms of accounting, accounts, lawyers, etc., which means that, apart from cash rebate, funding from further sources is required: “Do not limit yourself to the fact that as a film producer you want to see a product with the label of the film. You may have digital or energy products. Film production is your creativity, the result of your equipment that can be financed by other tools. We should be open-minded”.

The audience took the floor, just before the end of this panel, and posed questions. There has been a long discussion about attracting film productions in the various Regions of the country, an issue raised by Dimitra Rogoti of the Epirus Film Office. According to Ms. Livanou: “In many countries abroad, local funds offer the incentives for attracting productions. I don't think the state can pass laws and offer specific tools so that film productions are spread into all Regions of a country. Actually, it’s the other way round: the Greek cash rebate was established to attract productions from abroad. So I think it depends on the incentives a Region can and may offer”. Mr. Christopoulos added: “What we can do is to support Film Offices in their projects, so that they become more fruitful and can create the very channels they need to ask producers not to do shootings only in Athens and Thessaloniki, but in other parts of the country, such as Epirus”.

Finally, Mr. Samiotis made a concluding statement: “I must tell you from first-hand experience that a training plan is needed for business consultants in the audiovisual sector, because we need to explain to them how the sector works. And when we talk about business plans of local projects, there is a grey area, a true nightmare, called expected revenue. It is very important for the government to look at ways we can exploit our products, how we can generate revenue outside the country and this must be done in an organised way, such as the way we promote olives and wine. There needs to be a centralised and organised promotion campaign to plan how producers will explore the products and generate revenue if we want to put expansion and growth on the table. Obviously, we can make use of many programmes, but these programmes are being developed by other Ministries, which are often not related to the audiovisual sector and make it difficult to participate. Therefore, we need centralised management”. Mrs Chatzipetrou replied that we should imitate the examples of other countries, such as France. The panel concluded with the wish that there would be a reassessment of what was discussed in a follow-up discussion in the near future.