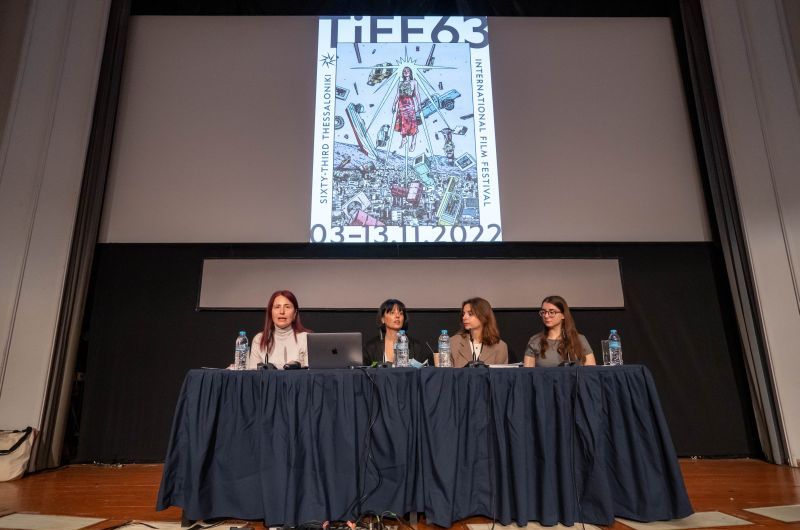 Then, Betty Kaklamanidou, Professor at the Aristotle University of Thessaloniki School of Film, took the floor and thanked the Festival, Mrs. Thanouli and Orestis Andreadakis, the Festival’s Artistic Director, for hosting her. She also thanked Vrasidas Karalis from the University of Sydney, speaker of the event and one of the first to have recognised Maria Plyta’s work. She also thanked her students who volunteered for the event presentations. “The colloquium’s goal is to review the Greek cinema history. We will all contribute to bringing forth the work of Maria Plyta. The colloquium is part of a global effort to integrate “forgotten” female directors into the cinematic Canon”, she said.

Afterwards Mrs. Kaklamanidou welcomed Gelly-Evangelia Angeli, painter and director, who had made a small documentary dedicated to the pioneering Greek director, offering us one of the rare archives and documents we have in our hands about Maria Plyta. “I was wondering who the first Greek female director was. Someone mentioned Plyta’s name and I decided to come by her house. I had been visiting her for 6 months. I finally managed to build a relation of trust and convinced her that I would do a great job. She was extremely cautious, well-organized and all alone. Her bad relationship with her daughter made a big impression on me. Her daughter couldn’t stand the constant absence of her mother because of her work”.

Maria Plyta’s life and work was presented to the audience by postgraduate students of the Aristotle University of Thessaloniki School of Film and by Betty Kaklamanidou. The presentations were prepared by:

Mr. Vrasidas Karalis, Professor at the University of Sydney and Head of the Department of Modern Greek, as well as Ms. Kaklamanidou, made some comments following the presentations. Ms. Kaklamanidou welcomed Vrasidas Karalis, who initiated both this colloquium and the overall research on Maria Plyta. Mr. Karalis in turn thanked Ms. Kaklamanidou, Mrs. Thanouli, but also the Festival for honouring him by inviting him in this workshop on Maria Plyta. Meanwhile, he urged students to believe in themselves and to rely on the Greek work, quoting the words of Nikos Kazantzakis, the legendary Greek writer: “We are a nation of such a multi-eyed tradition, though we have blinded many of these eyes”.

He also commented: “It is about a woman who shaped her own cinematic perspective and set up a social vision, reshaping reality. As Angelopoulos stated, art is not a lens that reflects, it is a lens that magnifies the small, the insignificant. A synecdoche realism. Behind all these, a grid is hidden, a network of different meanings. The rebirth of Greek cinema in the post-war era is a very important chapter of cultural reorientation, but also of redefining ourselves. Maria Plyta belongs to this cinema”.

He went on by pointing out that Maria Plyta’s films have been based on WWII, the Greek civil war and the immigration trauma. “My father burst into tears every time he watched Lustraco, because of the loss of his mother. It is about the emotions of an entire generation. Plyta represents the turning point in Greek cinema following the Greek civil war and the main story in her work is embedded in the characters of her films. Her films manage to create communication channels between people of different cultures and breeding. These film texts become scenes where all differences converge”, he commented. “Maria Plyta is a robust artist, with a robust cinematic perspective”, he added.

In conclusion, he referred to the need of organising the material. “The problem in Greece”, Mr. Karalis concluded, “is that there is no systematic organisation of the material. Fortunately, a first step has been taken in this scope with this workshop and EMEKT. Cultural memory must be left in the hands of those who will handle the past with respect”.

Maria Plyta, the first Greek director, was born in Thessaloniki in 1915. Initially she was involved in literature, while at the end of the 40s she took her first steps in film production, working on films directed by Alekos Sakellarios and Giorgos Tzavellas. In 1950 she made her directing debut with the film The Engagements, one of the most remarkable Greek ethnographic films of the time, with sets by Yannis Tsarouchis. With 17 films, Maria Plyta will establish herself for the next few decades as one of the most successful directors of her generation, writing screenplays for other directors as well. She passed away in 2006.

As part of the spotlight on Maria Plyta coordinated by the Festival, the following films will be screened:

It is about the tragic ending of love and lives of two young people when they find out that they are brothers. Starring: Emilios Veakis, Elli Xanthaki, Nikos Tzogias, Margarita Gerardou, Andreas Zisimatos, Anthi Miliadi, Dinos Iliopoulos, Dimos Starenios, Giorgos Velentzas.

During her summer vacations, Eva, a married woman, meets a young man she is living a short love affair with, provoking the wrath of her husband and the critical comments of the island's local society. Starring: Alekos Alexandrakis, Nina Sgouridou, Manos Katrakis, Aliki Georgouli, Dinos Iliopoulos.