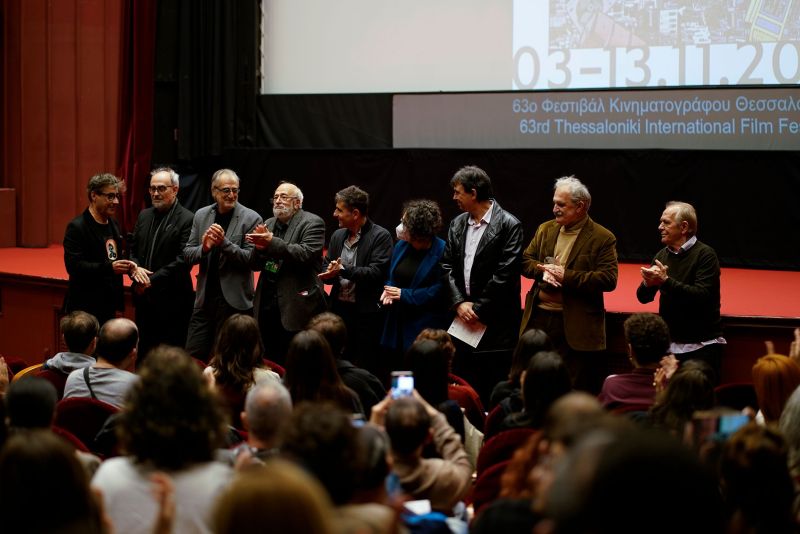 Within the context of the 63rd Thessaloniki International Film Festival, the universally accessible screening of It’s a Long Road took place on Tuesday November 8th, in collaboration with Alpha Bank, the Festival’s accessibility sponsor. The screening was honored by the presence of the director, Pantelis Voulgaris, as well as many other contributors of the film. The artistic director of the Festival, Orestis Andreadakis, prefaced the emotional event: “I would like to welcome you to another universally accessible Thessaloniki Film Festival screening. Exactly 25 years ago, the film embarked on a journey that led it to be hailed as one of the most influential and beautiful films of Greek cinema. It is also, a quite relevant film. It resurfaces after 25 years to touch upon very serious topics: the environment, our cultural heritage, love. We are thrilled today to be hosting the team of the film. We have here with us the screenwriter Giorgos Skampardonis, the director of photography Giorgos Frentzos and his assistant Konstantina Voulgari, two of the main protagonists, Dimitris Katalifos and Giorgos Armenis, and of course, one of the most legendary and gifted filmmakers of Greek cinema, Pantelis Voulgaris”. Present at the screening was also executive producer Panos Papadopoulos.

Initially, Pantelis Voulgaris took the stage: “Images say it better than words. We are very moved because after all these years we are back here at the Festival. With a film experience which, due to its adventure, the love of all the contributors, the wonderful landscapes of Macedonia and Thrace, remains unforgettable. Just like the dear friends who are not here with us. Thanasis Vengos, Ioulia Stavridou and Dinos Katsouridis, whose love as a friend and collaborator left an inedible mark from the beginning”.

After the screening of the film and a truly warm applause from the audience, a Q&A followed. To a question about whether or not the character of the film that shutters a night folklore club is based on a real person, Pantelis Voulgaris commented: “No, he is not. The character was made up by Skampardonis, Armenis and all of us. But it is unbelievable how this shooting happened. It was not a night shooting. It was morning, when I had them up and dancing on the stage and gradually, we created the right ambience”. As Giorgos Skampardonis added: “As you know, in cinema and literature, the heroes are not absolutely real. They are an invention of the director or the screenwriter. Here we have a hero, who seems extreme but this is not the case. If one observes the daily Greek reality, they will come across people way more extreme. This person represents a common case, the so-called, ultimate existential uprising. He is isolated in the countryside, trapped by his family which has fallen apart, he has no reference points anywhere, there is no way out for him, so he creates an uprising. A slightly different case from Zorba, who always comes and goes into everyday life.”

To the question raised about whether or not there is some kind of cohesion between the three stories of the film, Mr. Skampardonis explained accordingly: “The cohesion of a film occurs as a result of the narrative style of the director. They may draw the most disparate elements, and through their own narrative ways, their own touch, they may interweave these elements. Essentially, it is about three different stories of the Greek reality, which are representative, maybe even prophetic. All three add to a deepened dimension”. Mr. Voulgaris responded: “It is hard to explain how the scenes are filmed. They are the breaths of the actors, the crew. Every day you wake up and go to the set, you notice that people’s gazes are very close. Something truly undefined, but all this make up the magic of cinema. I do not plan directing on paper. It is a daily life full of inspiration and talent. These are the elements of all the people working in cinema”.

The next question was about actors and the way they experienced the screening of the film after all these years. According to Dimitris Katalifos: “It is very moving watching it again, 25 years later. A film that was shot in Thessaloniki, and now you get to watch it in this theater. I love that I am part of this film. I also love all three stories. In a way, Thanasis Vengos is also here. I feel very sentimental because we worked so well together. I learned how to drive for the film, I had no idea before that and I still don’t. And I remember the wonderful landscapes of the shoots in Macedonia. Tonight was a very beautiful night”. As Giorgos Armenis, who watches the film quite often, mentioned: “It gets me really high! I never had that in my life. I have never been to honky-tonks because I didn’t have the money, and I had to become a good actor in order to watch the hero and to live everything through him. Pantelis was a great help. He gave me a push… and sent me to the sky, but I never wanted to actually be like any of the characters I played. I would never, for instance, abandon my three children. But people like this do exist”.

However, there was a fourth story that didn’t make it in the film. “We spent a lot of creative time together with Pantelis and I am grateful for all I have learned from him. There were talks about which stories will make it or not – we were younger then and had many ideas – but we had to make a choice. I honestly don’t remember what that story was about, I think it had to do with wrestlers”, Giorgos Skampardonis explained. Then, he referred to a funny incident from the screening of the film in Belgium, where someone approached him with the question: ‘But how is it possible that the protagonist shuttered the whole place, without considering the rest of the customers?’ And I responded, “You are French and you don’t get it”. As Pantelis Voulgaris added, at a screening in Shanghai, the audience started dancing. The Cinémathèque of Thessaloniki will present a big tribute to Pantelis Voulgaris in the end of November, which will travel also to Athens, in the beginning of December.