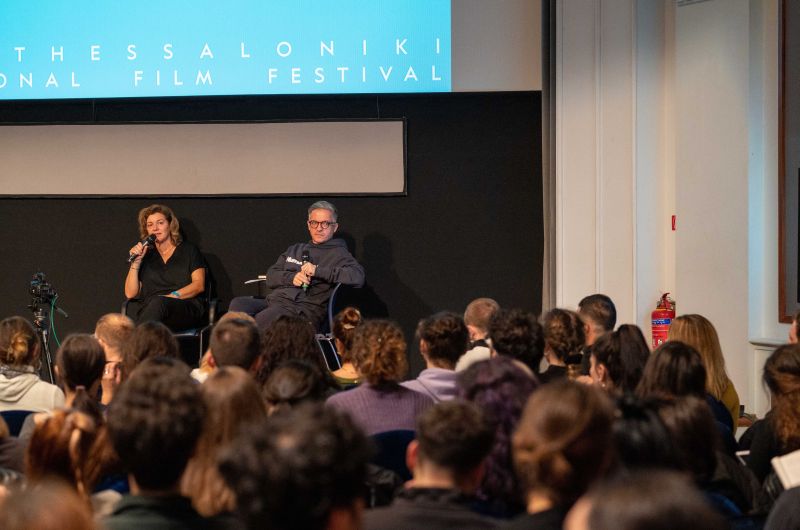 The masterclass delivered by Sofia Dimopoulou and Makis Gazis, two of the most famous and successful casting directors in Greek cinema and members of the Association of International Casting Directors, titled "Casting: An Inside Discussion", took place on Wednesday November 9, at Pavlos Zannas theatre. The masterclass is part of the great tribute to acting "Time to Act", held by the 63rd Thessaloniki International Film Festival. The event was introduced by Pericles Hoursoglou, Professor at the Aristotle University of Thessaloniki School of Film, who thanked the Festival and presented Sofia Dimopoulou and Makis Gazis.

Mr. Gazis initially took the floor: "Casting, as Martin Scorsese once said, is the 90% of directing. However, no perfect casting promises a perfect directing. The story is told by normal people who are called actors. If they are wrongly selected, the results are different than expected. It’s all about right communication. The actor must be in touch with himself and have self-consciousness. If not, he cannot build his self-confidence. We want actors who are confident," he said.

"We are our wounds, we are the praises we received," he continued. "I think it's important for the actors - and for all of us - to do psychotherapy, to communicate with our true selves. Actors are very special cases. They have to stand out with a distinct personality, and that's where it all starts: one's gift to communicate one's qualities. Observation is the most important skill of an actor. An actor should observe and filter everything, like a sponge. This information is recorded and then revoked. A miscommunication leads to a failed hearing. All actors, such as you, want to give a recommendation, a small indicative report, a resume. In case the report is abstract and the resume badly written, it ends up mischaracterizing you. That's exactly how casting is," he continued.

He then referred to the importance of a proper photo in a CV: "We want a recent and clear portrait. The photo you choose says a lot about you. It is important for the photo to be recent and that you renew it every time you make changes to your appearance!" he stressed out. "Some actors are hiding behind a persona they have built - a form of insecurity. They have not really dealt with themselves, but only with their physical appearance," he added. In casting, it's all a time hunt. Everything lasts for a certain period of time and if we waste more time in you, that's at your expense. Finally, I want to refer to the great drama of our times: social media. Pay attention to what you post there. Social media reveal what the actor thinks and how he works – everything is shown up there," he concluded.

Then, Sofia Dimopoulou took the floor, thanked the audience and the Festival, which decided to shed light on an under-lit profession, that of the casting director: "Casting has turned professional over the last 12-15 years, before that it was the job of the assistant director to collect resumes and sort them out. Now, we're talking about the assigning of a script from a producer or a director to the casting director. This assignment opens up a channel of communication: there are times where this communication is fruitful and remarkable, other times it remains indifferent. Many actors desperately send messages because they are unable to reach the desired result. They must bear in mind that there are many factors affecting the actors’ selection. No matter how good actors you are, you may not give the impression the director wishes for. This is why our work is for: the casting director raises debates and tries to broaden the perspective of the producer and director as much as possible".

He then touched upon the need for actors to manage rejection: "It's a very important skill, along with professionalism and the right resume. I constantly comfort young actors and remind them that casting is not just our decision. There is the script, the director and the producer. Our work is to promote dialogue, not to overtake the director. Remember that nothing is wasted: the experience of not being selected in a casting may be in your favor for your next audition. No-one checks you out just for a single role. It's a starting point for you to show what you are made of. Also, you shouldn’t take your chances only with the lead role".

He then commented on the issue of the hard aspects of the acing profession, evident already during the Drama Schools’ studies, all the way to in working environments: "You are responsible for the conditions in drama schools; you have the right to ask for changes, you shouldn’t be adrift. Drama Schools ought to motivate students to be inquisitive, which is very important for an actor". At this point, he placed emphasis on the importance of a well-studied script before casting: "When you have a text to study, you have to possess it. It enables you to be open, evolving and very giving. You can thus go further and not get stuck in a simple recitation. Casting can be constantly shifting and you have to adapt to this reality. You also have to be concentrated. Having your personal opinion, provided that you have studied very well your role, is always appreciated – though it may be a great promotion for both of us." Concluding, he mentioned the tactic of self-tapes, the videos sent by actors, especially after the pandemic, replacing casting in a physical space.

At this point, Vangelis Evangelinos and Efthalia Papakosta, two of the seven actors participating in the Meet the Future action of this year's Festival, took the stage, recreating a scene from the film Afterlov by Stergios Paschos. This was followed by the screening of two short videos of improvisations, Mrs. Dimopoulou described as "exemplary". When asked about the importance of physical characteristics in casting, Mr. Gazis replied that there is always an initial description of what is being sought, but we remain open - with the exception, perhaps, of age, which remains a binding factor.