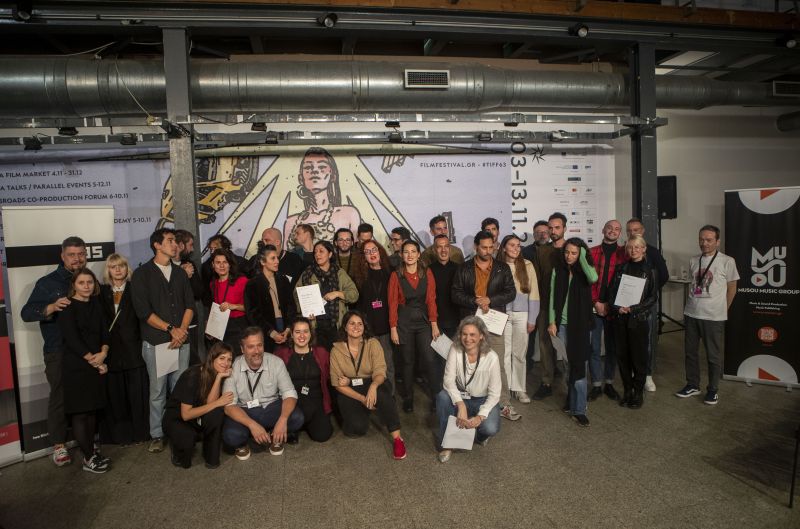 The 63rd TIFF's Agora presented its awards in an event that also included the presentation of Meet the Future, the festival's action joining the Greek Section together with the Agora, presented their work. Giorgos Kapoutzidis, the ambassador of the Agora, was the first to take the floor: "I am very glad and honoured to be here. Due to the strike, I just arrived and I couldn’t rehearse; I was given some notes so I will do my best. Initially we will start with the Meet the future and seven talented actors who have already caught our attention." Actress Aulona Lupa presented the action and the actors introduced themselves with a few words. Aulona Lups stated: "I'm glad to be with you. I am the founder of Acting on camera workshop, the first intensive, comprehensive and complete acting workshop on camera in Greece where we work with many great people of the film industry".

The presentation kicked off with Iosif Gavrielatos, who has participated in a play of the Onassis Stegi as part of the Youth Festival in 2019. He has worked together with Vassilis Douvlis and Stergios Paschos in short films as well as in feature films. Konstantinos Georgopoulos followed having taken part in plays, in films and in Vassilis Kekatos' TV series, "Milky Way" as well as Vangelis Evangelinos who acted in short films. In 2021 he starred in the film "Amercement" by Fokion Bogris. In 2022 he played in the film "Arcadia" by Yorgos Zois and in the film "Animal" by Sofia Exarchou. Abigail Loma was born in the Philippines and lives in Athens. Her first role in cinema was that of the central heroine in the great film "St. Emmy" by Araseli Lemos, which had its world premiere at the Locarno Film Festival in 2021 and the transatlantic film at the AFI Film Festival in Los Angeles. Then Efthalia Papakosta was presented, who starred in the big films "Listen to me" by Maria Douza and "Wishbone" by Penny Panagiotopoulou. Then Niki Papandreou followed. She has worked, in cinema, with directors such as Syllas Tzoumerkas, Christos Passalis, Stella Serefoglou and Angela Sanelek. She participated in the film "The City and the City" which had its world premiere at the 2022 Berlinale. And, finally, Klelia Andriolatou was presented, who did not manage to attend. She has participated in films, plays and TV series. She has worked with Stergios Paschos, Vassilis Douvlis, Christoforos Papakaliatis (in the TV series "Maestro") and Vasilis Mavrogeorgiou (in the play "Motel"). Her next theatrical collaboration will be with Konstantinos Rigas.

The Agora awards followed. Giorgos Kapoutzidis initially took the floor and said humorously: "I am not presenting an award, but the person presenting them", and addressed to Angeliki Vergou, the head of the Agora, who pointed out: "We spent four very productive days with collaborations. I would like to thank all the participants who came to Thessaloniki and especially Yianna Sarri for working together for over ten years in creating the Agora". This was followed by Elise Jalladeau, the General Director of the Thessaloniki International Film Festival. "I thank all the participants for their work and all the partners for their support and congratulations to the future winners." And Orestis Andreadakis, the Artistic Director of the Festival, pointed out: "The Agora is constantly growing every year. Tomorrow we are going to present our new Agora Series section. And we hope to see your films and series at the next festival. Good luck to all."

Here's a look at the awards:

The Agora crossroads jury wanted to congratulate all the projects and participants for their creativity and passion. The members of the jury mentioned: “We look forward to watching the great films that will come out of this forum: beautiful and powerful stories reflecting on intimate and social issues”.  And they continued: “Deliberating took a long time and we wished we had more awards to grant. Unfortunately, we had to make choices, sometimes not easy ones. Therefore, we decided to add a special mention as well”.

According to the jury, this award goes to the project that led us back to a hot summer, where old and new meet in a special setting.  A story about both emerging and buried passions, approached with a very personal touch of sensibility.

The reasoning of the jury:

The award goes to an auteur with an authentic artistic vision, who’s

lightness of the youth.

According to the jury, the award goes to a project with a deep character investigation that explores the complex relationship of a father and son.  It’s a project that makes us wonder if what we see is what is real.

As the jury mentioned, “the award goes to a well-structured project, telling a story about hope and achieving dreams. We want to give them the opportunity to take off to the international market”.

According to the jury, the special mention goes to a project that deals with family secrets, from an atypical angle adding sarcasm to a dark topic. It is carried by an enthusiastic and dedicated team.

The other prizes are:

The Onassis Film Award is bestowed to the project "Achinos" by Iris Baglanea. She was emotional and poetic in her few words about the conflict between childhood and adulthood, man and nature, life and death, presenting with boldness and sincerity a timeless story. The director's previous work and the dynamics of the artistic team promise a film worth seeing:

but already quite experienced. He has a clear vision and strong artistic potential. The project deals with what it means to be a man in contemporary Greece. It involves a crime, but it mainly deals with the dark soul of the killer who is a nice young man. And by the way, does he have a dark soul? Or is he just influenced by family bonds? We will discover this in the cinemas… The choice we made was motivated by the qualities of the director and by a strong story but just as much by the great producer who is involved in the project. And, as we all know, without producers there would be no films.

The awards for the Works in Progress were, also, presented.

Reasoning: for an unapologetically queer, warm, and funny story about the hardships of friendship and filmmaking.

Reasoning: To a project which courageously tells us a story about female solidarity, and the challenges of motherhood, while using an inventive mixture of genre elements.

Reasoning: to two visionary filmmakers passionately building a unique cinematic language, filmed during an absurdly challenging period of a country.

Reasoning: For plunging us into a fantastical world with a singular cinematic direction, while depicting the unique love that unite a mother and her daughter.