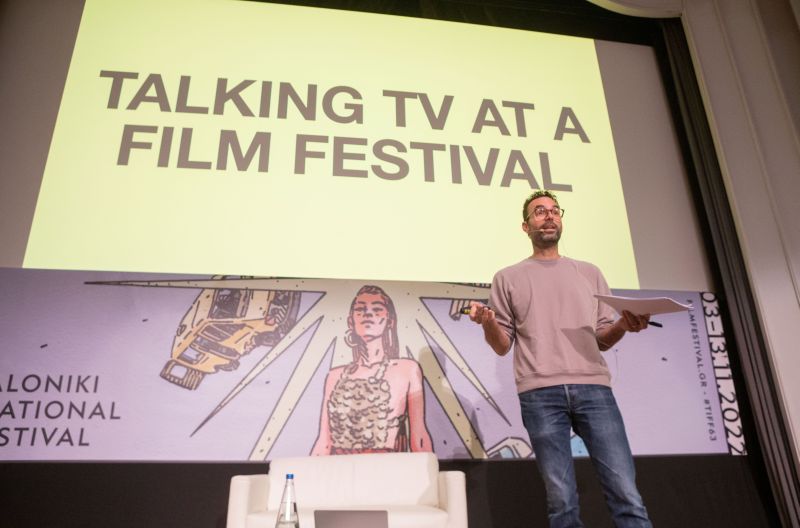 In the new section of Agora Series, the 63rd Thessaloniki International Film Festival examines the relationship between cinema and television. On Thursday November 10, at Pavlos Zannas theater, the Festival hosted a masterclass by Victor Quinaz, TV screenwriter and producer (Netflix Big Mouth, GLOW, among others), titled "Don't be scared, it's only TV!". Victor Quinaz took the floor and said: "Let the show begin! Today, I will speak about television, with a bit of sarcasm, at a film festival. More specifically we will talk about the global television industry and streaming, in particular. Today, streaming is the way most of us watch movies. First, let me present you a list of the top streaming companies worldwide. On the top of our list, we see Netflix with 225 million subscribers, Prime Video and Spotify with 205 million and 180 million subscribers respectively, Disney+ with 130 million, HBO Max, Apple Music, Amazon, YouTube, Hulu, and SiriusXM."

"We will focus on Netflix, my employer right now and the top listed streaming company in 190 countries. Many say that it is due to the algorithm but that's not all. Let's take a look at its hit series. It's Squid Game Season 1 with 1.65 million hours of streaming worldwide. Then Stranger Things Season 4, Money Heist Season 5, Bridgerton Season 2, Bridgerton Season 1, Money Heist Season 4, Stranger Things Season 3, Lucifer Season 5, All of us are dead Season 1 and The Witcher Season 1. In the US we want to be in the spotlight, as if we have disovered everything, as well as television. How did we get to the globalisation of television? Since I was 20, when I was trying to become a screenwriter, structure has been the most important thing to me. Let's take Βridgerton's structure for example. The teaser is 3 pages. Act 1, 11 pages. Act 2, 11.5 pages, act 3, 8 pages, act 4, nine pages and act 5, 8 pages. And then we have Breaking Bad whose structure is a bit different because we have ads. The teaser is 3 pages, act 1, 14 pages, act 2, 13.5 pages, act 3, 11.5 pages and act 4, 14 pages."

Victor Quinaz then referred to the history of modern television as long as his own one. "A good story has to be coherent. But initially I'll tell you what is needed to sell a series. You have to introduce your characters, create your world around you, and then the action begins. I will try to help you as much as possible because I have seen how Greek television is flourishing. Maybe you should... hire me. And let me tell you that I am going to share with you the experience and of course you shouldn’t be afraid, it's only TV. After all, you have all watched so much TV that you are already professionals. Everyone has watched 10,000 hours of television. Children, at the age of seven, can already become producers. And don't forget TV is fake, though shows are real. I like to tell stories with a beginning, a middle and an end. I would wish my stories to enlighten and be different. Since I was a kid, I had been telling stories in order to escape from reality. When I am about to sell one of my series, I give them a glimpse of my personal life so they can see who I really am. For example, I want people to know that I come from Miami and that my father is an immigrant from Lisbon. That I have an issue with commitment and the need to be loved and that I got a scholarship to university to study acting. Then I went to New York to become a filmmaker. And that I'm going to take their money and invest it properly."

He continued: "I went through a lot to become a film producer. I did ads for awful people with very little money in order to enter to the world of film production. So, I used YouTube and became the oldest YouTuber for a while. And while it started as a joke, our videos went viral and that's how I learned how algorithms work. Hollywood people were thrilled with our work and we used to tell them we wanted to make a movie. And we made the movie Breakup at a wedding in 11 days with little money; it did though well in distribution. It was screened in hotels during weddings. But when it was screened in the cinemas no one went to watch it. And then we turned to reality shows. We love watching topics we hate. Through reality show production I became a better producer. And if I was asked to give you a tip this would be to write and produce something of your own. A series is something like the baby. And the parents are the showrunners. Studios and film production companies are like grandparents. A big difference between television and cinema is that the former needs a screenwriter, but many professions are needed for a film to be released. The screenwriter is the heart of the series."

He then referred to the Big Mouth series. "We show and talk about things we don't deal with on TV – even though we're on Netflix. It's about adolescence, something like American Pie. We're talking about the girls' period, so we're also talking about women's health, topics that are not often discussed in the US. It's about sexuality, and Netflix has let us do whatever we wanted to. We were very diligent, we even hired researchers. Our cartoons are ugly but we did it on purpose. We didn't want them to be desirable. Also, in the series we first talked about asexual people. We spoke with them many times. They read the scripts, because we didn’t want to be offensive and they loved it. We got a lot of love. The innovation of Netflix is that it lets us express ourselves freely. We also incorporated the show into another series starring monsters. Our most famous fan is Hugh Jackman and we gave his figure to one of our monsters."

Victor Quinaz then referred to the series Orange is the new black that ultimately helped Netflix reach the top. "One of my favourite shows, along with Glow. I was invited to write the script for season three, dealing so strongly with women and diversity. And then Netflix mega shows like Stanger Things followed. The series should be entertaining. And that's a big bet for Netflix. One of its big competitors – which will probably surpass it – is Disney+. It is of great quality but as a company it is a great white shark. It's been in streaming over the last three years and it is already high ranked."