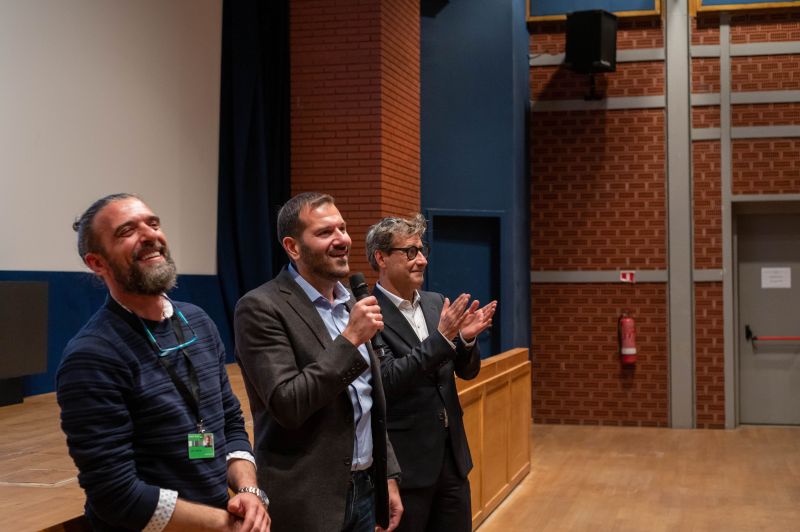 The avant-premiere of the first episode of the third season of TV series The Other Me, titled Nemesis – The Beginning of the End, a production by COSMOTE TV, the Festival’s Grand Sponsor, took place. Τhe Festival’s Artistic Director, Orestis Andreadakis, prefaced the event: “We launched a new activity, a new section of the Agora, the Agora Series, where, as of next year, we will accept TV fiction series as well”. After concluding, he invited on stage Dimitris Michalakis, Executive Director of COSMOTE TV, and the director of The Other Me, Sotiris Tsafoulias.

Mr. Michalakis was the first to take the floor, to discuss the collaboration between COSMOTE TV and Mr. Tsafoulias: “We wanted to expand to the field of fiction, because Greek TV consisted mainly of reality shows, and we wanted to do something different. So, one night, I watched The Other Me on YouTube and that’s when I understood that there is a creative cluster in Greece that can meet our vision. So the next day, through a common acquaintance, Sotiris visited my office accompanied by producer Fenia Kossovitsa from Blonde, who helped us give shape to Sotiris’ vision”.

Afterwards, Mr. Tsafoulias took the floor, mentioning that a full circle is about to close in an ideal way. “In this room, the circle of The Other Me opened, and the beginning of the end, which is the title of the episode, will be written here again. So, we are completing a full circle and I’m thrilled about it because, as I had said back then, I love your city very much.” He then spoke about his concerns as a show creator, not only about the story he wants to tell, but also about the way he should present it, so that he would keep the audience interested. During this season of the show, this concern was not something that troubled him, as he was guided by the show's audience, all those who watched it. Mr. Tsafoulias, along with COSMOTE TV and Ms. Kosovitsa, as well as his collaborator, screenwriter and director Katerina Filiotou, were all given the freedom to create the most sensitive and human-centered season of the show, without undermining its identity. “The greatest success of making cinema or theater is this exact moment, the close contact with the audience, and I am grateful for that”. Before the episode screening, Mr. Michalakis thanked also EKOME and Leonidas Christopoulos, Secretary General of Digital Governance and Process Simplification, who was also present at the premiere, while Mr. Tsafoulias added his thanks to Mr. Elias Ledakis, head of Production Design, Claudio Bolivar, his cinematographer, and the cast.

After the episode screening, a Q&A followed with the audience and the two screenwriters, Mr. Tsafoulias and Ms. Filiotou. “We had to screen another one”, the director said, prompting the audience’s applause. To a question about the original idea, the screenwriters responded that it was the Amical Number of Pythagoras, while the idea on which the series is based, was the Deeds of Theseus: “Here is where Katerina Filiotou came in and was the first to keep me focused on the credibility of the universe, stressing out that’s it’s kind of too much to have two serial killers in Greece, who both follow the pattern of an ancient myth. Therefore, we had to respond and come up with a solution script-wise. This was the backbone of the next series as well, because after Theseus, we went on to Catharsis, which again had to include our main element – myth, allegory, rendition, explanation, but to also follow a continuity, because we couldn’t have three out of three with Theseus. So we drew inspiration from the myths of Pythagoras, Theseus, Medusa, who was the first rape victim to be punished instead of the rapist. As for this season, it deals with a theme we cannot yet reveal”.

“As a general motto, I believe that in series and in films you often don’t need to explain what you meant. Whatever the work of art says to the soul of each viewer, this is its inner truth. So, when there are not many striking diversions from the truth, there is no need in me telling you if the lights represent something specific. It’s like going to a restaurant and on your way out, you visit the kitchen to see how the meals are cooked”, the director explains after a question on the use of warm and cold lightning in one particular scene. “The beauty in a mystery is the secret it encompasses and not the truth it may hide”, he concludes. Also, the issue of piracy and illegal streaming was brought up, as something that threatens the whole ecosystem of production. “It’s a pity! I can relate to the need behind this action, because I understand that times are hard, but the person who resorts to this practice is a thief and the one using the material is a fence, as they steal the work and toil of a lot of people who try to set up a production, which results in the end of the day, in the producer thinking that the series didn’t make its money back, so there is no motivation for the producer to make the next project happen. When they offer us reality shows that humiliate women and the human kind, reality shows that transform hunger into a simulation game, where we watch the protagonists being hungry, while actual people are really hungry. So, if someone tries to make a fiction series to stand against this ugliness and lack of aesthetics and you are willing to pay 30 euros to watch it illegally, then the issue is more global than it initially seems”.

Mr. Michalakis also expressed his view on the topic: “Piracy in Greece is estimated at 600,000 to 900,000 illegal connections, based on our calculations, which means that there is a huge revenue forgone, massacring creativity. For instance, at COSMOTE TV, we wanted to produce 10 series per year, but we can’t”. Spiros Bibilias made a statement as the President of the Actors Guild, as well as a member of DIONYSOS OSSDEI SYN.PE, an organization that deals with the rights of actors, saying that the aforementioned organization and others of its kind on a global scale, “put up a big fight to combat this thing, because they steal from all of us, the producer, the actor, the screenwriter, the director, because we’re talking about a product, which should bring in a small amount every time someone watches it, just as it happens with books”.

“We were nervous about one thing, about whether or not this season could live up to the previous ones. We worked on the script for a long time. This season took eight to nine months. You dive in and hope, anxiously waiting for the script to be read by the producer and to send over feedback, even some friends as well. We wait”. These were the words of Ms. Filiotou about the personal bet of the screenwriters. “Every time we have a story to tell, which will not break the bond of trust and love we built with the film. Even when we got the green light from COSMOTE and were ready to shoot, we were left in agony, wondering if a story could emerge from what we had written”.

Ms. Filiotou, on whether or not there is a political stance expressed via their characters, she clarified: “We build the characters with our story in mind and whether or not they serve the meaning of what we want to say. The answer to whether or not we agree with what each character says, it’s up to you to answer, and you will probably do so through the evolution of this character”. Mr. Tsafoulias agrees and adds: “In the first episode, we don’t take a stance. We present a situation. This is the reason why pilots are always a little slower, the pace is not that fast, because they are introducing you to the universe and the characters, so that the plot can later unfold”. Finally, they talked about their collaboration, which was initiated by the producer’s initiative. “It was a risk, but we hit it off. We gave a lot of brainstorming sessions, one adds something, the other cuts and sews, we say what we don’t like and this is how it’s working”, ms. Filiotou says.