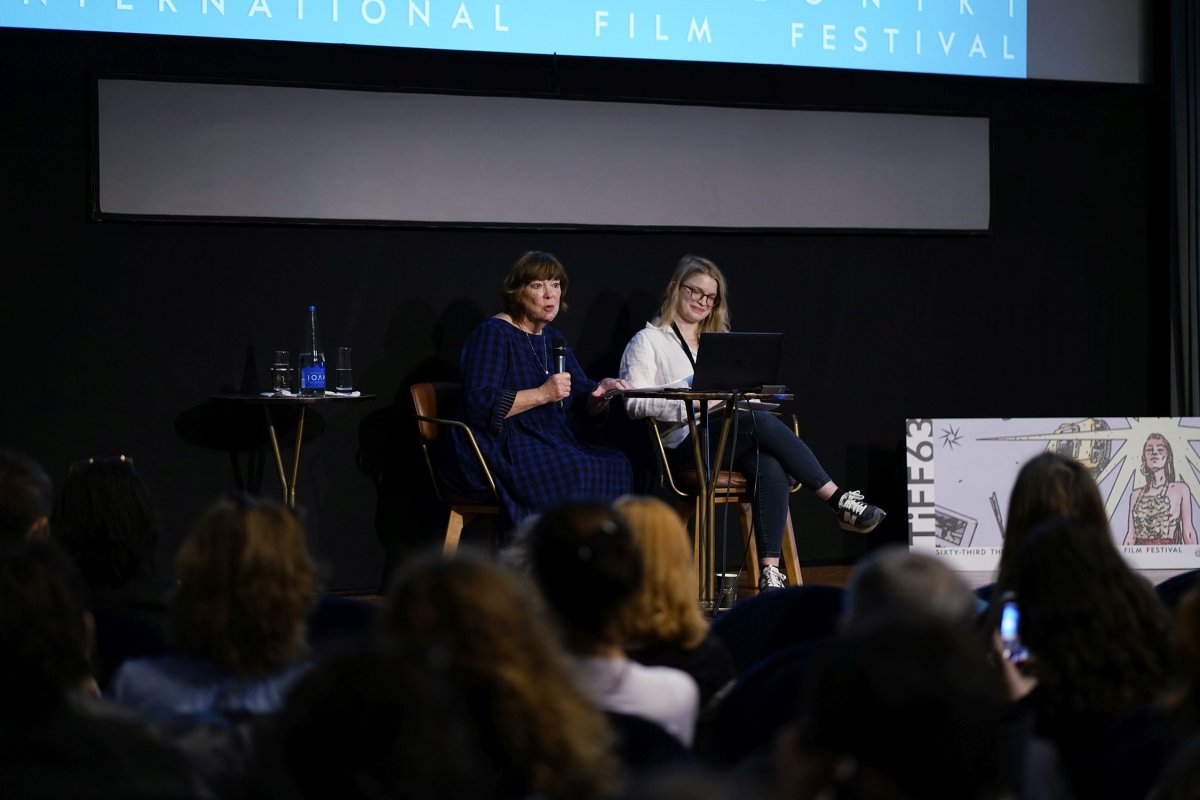 Within the context of the grand tribute to acting hosted by the 63rd Thessaloniki  International Film Festival, titled “Time to Act”, casting director of James Bond, Debbie McWilliams, along with her niece and collaborator Jemima McWilliams, delivered a masterclass on Friday November 11th, at Pavlos Zannas theatre, discussing the history as well as the future of casting, both in Hollywood and European productions.

Dimitris Koutsiabasakos kicked off the presentation. “I’d like to welcome you to the final masterclass on acting hosted by the Festival, in collaboration with the Film School of the Aristotle University. I think this masterclass is the perfect way to conclude the series of talks that preceded on the art of acting and professional landscape in the audiovisual sector. Debbie and Jemima McWilliams represent two different generations of casting directors, and will embark on a retrospective journey into the history of casting”.

Debbie McWilliams, who has had an impressive course in the field of cinema for forty years now, having casted 14 James Bond films, starting with For Your Eyes Only (1981), took the baton: “We will give you an idea of what we do and how we got here, because behind every industry there is a story. For as long as there is cinema and the need for actors, there will be a need for someone to choose these actors. As years go by, the field is changing rapidly and I have noticed many changes that are not always positive”.

A trip down the history of casting came up next. “As far as I know, casting began between the late 1940s and early 1950s. In the UK, there were two casting directors who stood out. Maude Spector, who worked on all the James Bond films before I took over, and had a wonderful career in films such as Lawrence of Arabia, while being the one to discover Elizabeth Taylor. The second one, also born in 1916, is Miriam Brickman, who did mainly independent films and was very bold with her choices. In the US, things evolved at a slower pace because of a different system. When someone played the doctor once, they would keep playing the doctor. One casting director that stood out was Lynn Stalmaster, with films such as The Thomas Crown Affair. In the US movie business terminology, no-one but the film director can be named “director”. So, they cite us in the ending titles as “Casting by”, which served as the inspiration behind the titular Netflix film – you should watch it if you’re interested in casting. Such practices undermine us and prove that even the industry people have no clue as to what we do”.

As Debbie McWilliams mentioned, one phrase that remained stuck in her mind was the following: “You are a destroyer and not a creator of dreams”. “It is so hard to hear words like these. Actors don’t think of us as friends, but without them we would be out of job. Many actors think they are fit for any role but they are not, and we have to make the right choice. In previous years in the UK, every theatre company had its own casting team. During the early stages of my career, I worked at the Rocky Horror Picture Show, which is celebrating its 50th anniversary. Now we are all freelancers. So, we get paid when we work. In the meantime, we try to educate ourselves more. For someone to become a casting director, they need to have an excellent memory, personal taste, and an open mind, so that they don’t reject anybody they’re not fond of, and of course, imagination. When reading a script, you have to be instinctively thinking of faces”.

According to Debbie McWilliams, trends change through the years. “A terrible casting was the case of Lawrence of Arabia, in which Alec Guinness played an Arab. Or Omar Sharif playing Doctor Zhivago. Then, the same actors were chosen for many films. The trend nowadays is actors going through the experience, but this undermines the work of an actor who plays a part far from their own personality. This is acting. There is also a tendency suggesting that gay roles should only be given to gay actors. However, I would like to not express my view on this. For me, what matters is acting. Similar is the case of the black actors in Bridgerton, which created a new world and brought change. Someone I believe has not been lucky with casting all these years, is Anthony Hopkins. We have never seen him do comedy and he always made everyone laugh during the shooting of films with his funny stories”.

“Jemima has been working with me for 8 years now, so she’s well-trained and we also worked together on the last James Bond film, No Time to Die”, said Debbie McWilliams. “It was an honor for me to work on something of this scale. It was hard for us, as we saw a lot of actors for the roles. Lashana Lynch was one choice we were really fond of from the start and she worked so hard in the demanding scenes. The choice of the young girl, playing the daughter of Daniel Craig and Léa Seydoux, was also a challenge –physical resemblance was also a priority– and we found her in a 4-year-old French girl who was amazing and trusted us from the start, getting really close with Léa”, Jemima McWilliams explained.

“We spend a lot of time talking with agents. In Spotlight, the site we visit to draw information about the actors, 70,000 actors are listed. We are lucky because there are a lot of shows to in the UK and draw inspiration from. Many casting directors have a background in acting”, Jemima mentioned. “I don’t like reviewing many people for one role. I prefer to disappoint 5 people instead of 25, but the trend today is to give a chance to everyone. It is a different world than when I started working”, Debbie McWilliams added.

Jemima McWilliams went on to talk about the production of independent films in the UK. “Investments are hard these days. Having a young actor and a young director is a project difficult to place trust on. Streaming platforms have altered the way we watch films. When we watch a film at home, it is completely different. Studios want famous actors or TikTok stars who don’t know how to act. There is also a huge variety in films nowadays, such as the film Coda that made the community of deaf people visible. We are happy that the industry is opening up for everyone and maybe the directors need to have more patience – not their strongest quality – but it is amazing that this is happening. Indie films are the protagonists of film festivals and producers invest in films that will compete for awards”.

How can actors prepare for the future? “With all this content, there are more opportunities. We spend many hours online nowadays so it’s a good thing to have your information uploaded on IMDB – and to not lie on your resumé. Do your research before going after a part. Be open and enthusiastic. Directors want to work with you and you want to work with them And be careful of what you post on social media, as well as of who you get in contact with, because many people will pretend to be casting directors. If it seems too good to be true, then it probably is”, Jemima stressed out.

Questions from the audience came up next. The first one was about how actors deal with stress during the casting process. Tonia Sotiropoulou discussed her own experience. “I lived in London and I was 24 when the agent called me for a James Bond casting. I was very nervous, but Debbie was really sweet. All of a sudden, her dog came in the room – I love dogs very much – and my mind logged off completely. I was relieved of all the stress. She told me to sit on the couch and look at the camera my lover was waving goodbye. I did that and got the part”.

“Léa Seydoux was also trembling at first, until I told her to stop because it was getting embarrassing both for her and us. And she called us to try again. And that she did”, Debbie McWilliams mentioned. “The biggest challenge for me is to go on working. I won’t be able to live up to Debbie’s career but through networking, I would like to meet people and continue to work”, Jemima responded to a question about her biggest challenge in regards to her work.

As for the hardest James Bond role that Debbie had to cast, she replied: “It was Daniel Craig. He worked mostly in theatre and had small parts in movies. He wasn’t a popular choice at the time. On top of that we had an awful press conference where he was asked solely about his love life. He is one of my favorite Bonds. The next Bond will be something I won’t experience from the inside. It is hard when we get in touch with American agents. We were looking for Rami Malek for a part in James Bond – he was not very famous then – and despite many messages we left for his agent, we couldn’t get in touch with him. Until I randomly ran into him at an event and the next day he was in my office”.

“After Brexit, things are hard since you have to have a job in order to stay in the UK. So, it’s best if you’re based in Europe. If we want you, we will find you, because we know what we’re looking for. Just like Tonia, you can do it too”, Debbie McWilliams explained after a question on how a Greek actor can get in touch with them. As for the reason why most casting directors are women, Debbie responded candidly: “Because we’re better and more patient”.